Count On Us Challenge 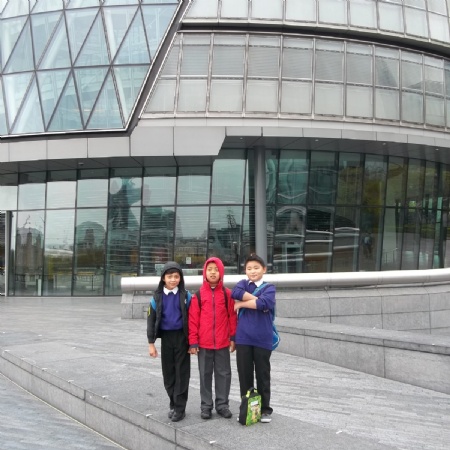 On Thursday 29th April, Mr Hindmarsh took Conway's team to take part in the Maths Count on Us Challenge at City Hall.

On Thursday 29th April, Mr Hindmarsh took Conway's team to take part in the Maths Count on Us Challenge at City Hall. Arzav (4G), Prashant (5G) and Ashis (5W) represented our school and put in a very strong showing working as a team to compete against 100 other schools in London. Here is their report of the day:

We had a fantastic time at the Count on Us Challenge Heats at City Hall, located in Central London.

We had to get to school at 8am to make sure we arrived on time. After taking the Southeastern train to London Bridge Station, we walked along the river to City Hall. We passed many sights such as The Shard, The Gherkin, Tower Bridge and HMS Belfast.

The tournament had 5 rounds. The first one was all to do with shapes. We had to solve puzzles including tangrams and pentonimoes. Our school was the first to finish this! Rounds 2-4 were all about mental maths. We played the 24 game in which we had to find different ways to make 24 using random numbers (this was really fun!). The final round was code breaking. We had to crack a simple Caesar shift code in order to decode a message and solve a maths problem. This was the hardest part - none of the schools completed this!

Although we didn't win our heat, it was a great day. We got to meet new children and teachers, test our maths skills under pressure and had legit fun! We can't wait for next year!