In reading we read several books over the term. 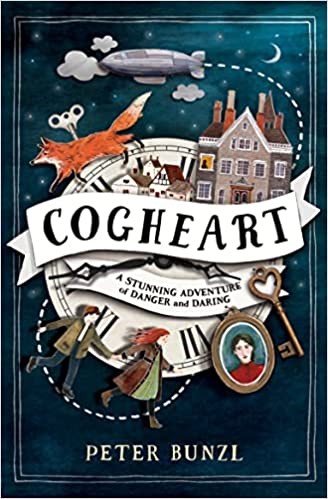 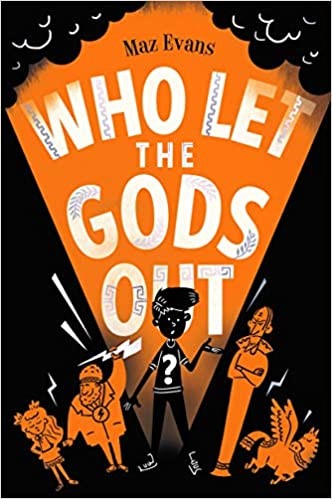 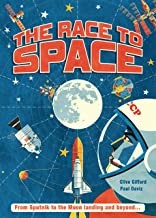 Cogheart’ by Peter Bunzl.  This was our first text of the term; it is about Lily’s life that is in mortal peril. Her father is missing and silver-eyed men stalk her through the shadows. With her mechanical friend- Malkin and Robert the clockmaker’s son – Lily is plunged into a murky and menacing world but she realizes that those she holds dear may be the very ones to break her heart…
The children really enjoyed the murder, mayhem and mystery they meet in this gripping Victorian adventure. The language within the book was challenging but with lots of discussion and debate it became clearer to them. They enjoyed the mechanical creatures within the book.
We followed that text with Letters from the Lighthouse which had lots of links to our topic of World War 2. Olive and her brother Cliff live in London and are evacuated to the Devonshire coast and this is where the adventure of daring and espionage begin. A mystery needs to be solved which Olive attempts to do but as usually there are lots of problems that get in the way. The children had lots of challenges on the way whilst reading this with several questions where they had to put themselves in the character’s shoes and predict what they might do. If you enjoy a mystery, then this is a good book for you.
The second half of the Autumn term started with Who let the Gods Out by Max Evans, this really got the children laughing and was a total change to what we had read before. Even the cover caused lots of discussion as to who the characters were and why were they dressed like that? One child was convinced they had been to a fancy dress party. Then when we read the blurb (see below) further questions, predictions, comparisons came out.
When a shooting star crashes to earth, it lands Eliot smack bang in the path of Virgo - a young Zodiac goddess on a mission. But when the pair accidentally release Thanatos, a wicked death daemon imprisoned beneath Stonehenge, they've got nowhere to turn for help but to the old Olympian gods.
Finally, we ended with The Race to Space, a non-fiction book where the children learnt about the man who walked on the Moon and how he got there. Following the 50th anniversary of the Moon Landing on 20th July 2019, the book celebrates the Space Race rivalry between the US and the Soviet Union. The children learnt that it was a neck-and-neck race between the two superpowers and that the rivalry gripped the world. The illustrations and text supported the children’s learning and understanding of the vocabulary within the book. Finally they learnt that these two space agencies now work together, and how the monumental achievements of the space race created world-changing technology that we all use and benefit from today.

Then in writing we used the following books 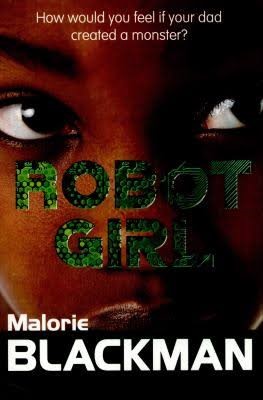 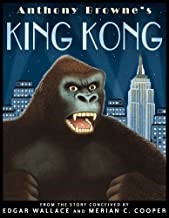 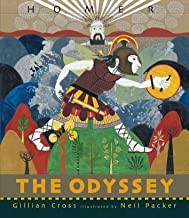 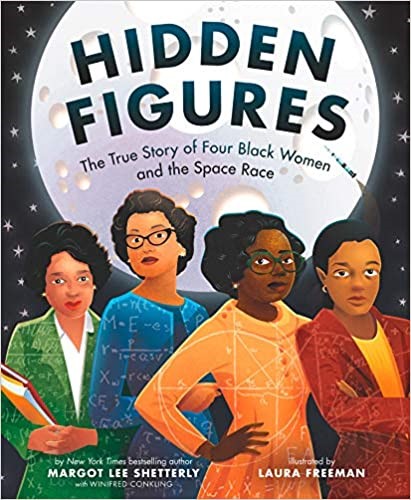 The children started the term with discussing and writing a futuristic drama full of suspense. They learnt that Claire (main character) is keen to find out what her dad has been working on in his lab. He's been really excited about it and Claire knows it must be something that will make him even more famous. So she sets out to find out what it is but there is trouble ahead.
Next we all became reporters and using the text of King Kong and the following information:-

We wrote newspaper reports see below 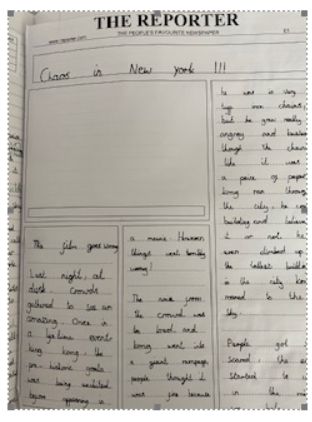 Then off on a Greek adventure learning about The Odyssey, the children really enjoyed reading and writing about Odysseus and his adventures. They wrote great adventure stories ensuring the hero always tricked or defeated the monster.

Finally, we looked at Hidden figures, this linked to our reading book ‘Race to Space’ and was the story of three African-American women who worked as computers to solve problems for engineers and others at NASA. For the first years of their careers, the workplace was segregated and women were kept in the background as human computers. Lots of discussion came out of reading this book. The children raised lots of questions around the word segregation. They were not impressed that Black and White people were treated differently. That men and women were treated differently! They discussed the information and related it to other topics they had learnt in History and PHSE involving Rosa Parks and Martin Luther King.
After reading and discussing what the women had done, the children choose one and wrote about their lives. They were amazed and astonished that these brilliant African – American women had served as the brains at NASA (Katherine Johnson, Dorothy Vaughan and Mary Jackson) and helped launch John Glenn into Space.

During the Autumn term, the children began by building upon their year 4 knowledge. An emphasis for some children was to ensure they had a sound knowledge of their tables, including division facts up to 12 x 12. Then using this within worded problems

Children work with both larger and smaller numbers in Year 5 and so have been identifying the value of digits in numbers with 3 decimal places and numbers up to one million. Addition and subtraction written methods have been taught and children have applied them to solve practical problems. In geometry, children have learned about calculating the perimeter of different kinds of shapes, both regular and irregular. However, children found using a protractor to measure and construct angles particularly challenging!

In Science in the Autumn term, we learnt all about Space and the planets. We are now able to identify all eight planets by their positions in relation to the Sun and their physical properties. An interesting fact we learnt was that Mercury contains wrinkles which are called lobate scarps. This suggests that Mercury's crust could have possibly contracted.

Additionally, we engaged in discussions arguing which theory of planetary movement is correct. In the end, we all agreed that the heliocentric theory could be proven with more evidence in comparison to the geocentric theory. As well as this, we took part in a very exciting investigation to help us understand how day and night occur. We can now explain this using examples from around the world. 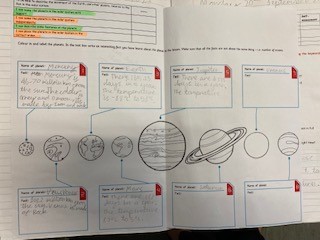 We have really enjoyed our Space learning this term. 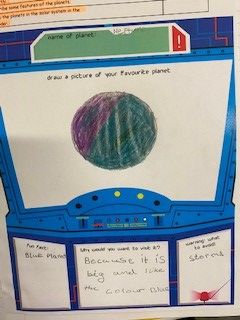 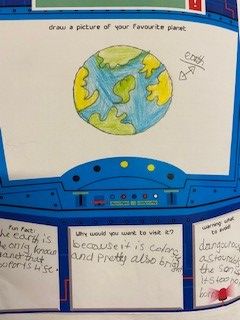 Following on from this we learnt about Forces in action and learnt about how unsupported objects fall towards the Earth because of the force of gravity acting between the Earth and the falling object.  We usually think of gravity as pulling everything DOWN but that is not always correct. Gravity pulls everything towards the centre of the Earth. That is why the rain in this diagram appears to be falling upwards.

Friction acting between two surfaces was really intriguing as it caused a lot of discussion and debate. The children completed an investigation and recorded their results.

During the Autumn term in topic, year 5 studied World War 2. They As part of this, the children have located countries around the world that were involved in the war on a world map. We have also looked at evacuation, rationing, the Blitz and life during the war. For the remainder of the term, we studied the Battle of Britain and key events that occurred during the war. 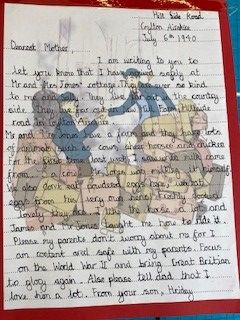 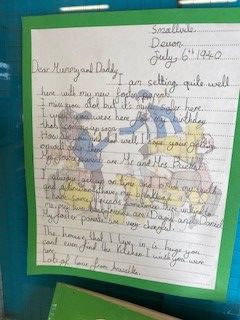 During Art in the Autumn term Year 5 created artwork based on the ‘The Blitz’.  This linked with our topic ‘The Second World War’.  To achieve this we explored a range of materials and how to manipulate materials.  We used masking tape to create lines and shapes on card then used chalk and pastels to colour over the whole page.  Once we removed the tape it left us with an interesting pattern.  We used this to create the flood lights from the ground during the blitz.  We also consolidated learning of how to make a silhouette, some of us needed some support in this as it is really tricky! 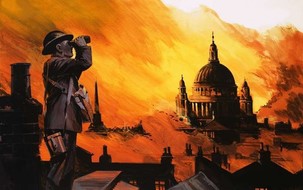 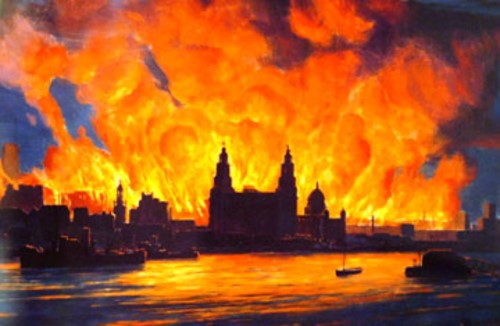 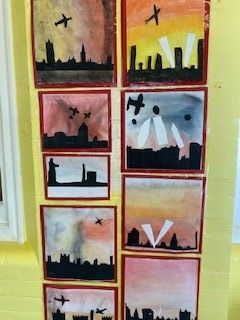 During the Autumn term, we looked at ‘Faiths in Greenwich’ and ‘Sikhism’. For ‘Faiths in Greenwich’ we looked at all the different faiths and religions that are in our borough, and compared the similarities and differences. We have learnt about their beliefs and how they relate to the local community. We researched how the local community works together and the effects this has. We created a Fair-trade poster and decided that by helping others we also help ourselves, this is also linked to some of the PHSE work that we have been doing. 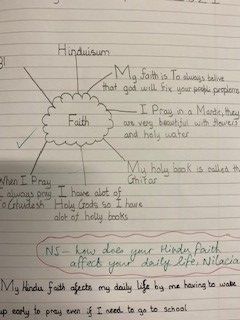 In Autumn 2 we looked at Sikhism. We researched and noted down the contributions that the 10 Gurus have made. We looked in more depth at the symbols and mantras in Sikhism and how they are important. We also focussed on their holy place the Gurudwara discussing what they have to wear, what rules they have to follow, and researching what they look like inside and out. We also focused on their holy book the Guru Granth Sahib and discussed its importance. 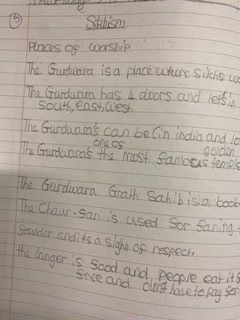 The children worked hard with researching the information to answer questions and then go on to write up a piece on Sikhism. 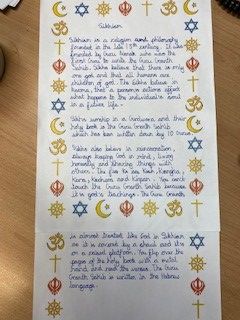 Computing
Children looked at developing games and using block coding a simple maze game and thought about how the game works on a computer. Children decomposed the game into smaller parts so that they could work out an algorithm for how the computer will sequence instructions, use selection when there is a choice and how to create a condition for repeated procedures. When the code didn’t work, children analysed their code using a highlighting stepper. Then, once the bug was identified, children separated their code so that they could test that one part.

During the Autumn term, Year 5 developed their understanding of the importance of teamwork. They completed a number of teambuilding games with a range of focuses including communication, leadership, co-operation and turn taking. They also had a two-week intensive course at the Thamesmere swimming pool which allowed the children the opportunity to learn to swim or develop their skills further if they could already swim.

Next term we will be focussing on writing a biography after we have read Freedom Bird by Jerdine Nolen. Then go on to writing a fantasy story after reading The Lost Thing by Shaun Tan. All exciting books to study and provoke lots of discussion while we are reading them.

In Maths We will be consolidating our skills in place value, written calculations including those involving fractions, investigating measures and converting units of measure and discovering more about the area and volume of shapes.

Topic – We will be looking at Ancient Egypt and linking this to other foundation subjects.