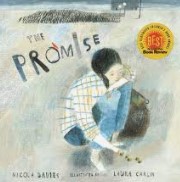 In English last term, we had the theme of ‘migration and movement’.  To immerse ourselves in this we read a range of really exciting texts in Reading and Writing.  During our Reading sessions we got stuck into ‘Fly Me Home’ by Polly Ho Yen and ‘Darwin’s Voyage of Discovery’ by Jake Williams (this one also really helped us in our science topic which you can read more about below!) We were able to develop our recall skills with all the new information we learned.  We also loved getting to know the characters in these stories (as well as out Literacy ones too).  We used our inference skills to identify how the characters felt at various point of the story and to make predictions about what may happen.  Some of us were able to really connect with the stories as they were about families that moved to a different country, as are some of us!

This was also a theme in the book ‘The Unforgotten Coat’ by Frank Cottrell Boyce.  We loved learning about the two brothers: Chingis and Nergui.  The main character was also in Year 6, just like us so we were able to relate to this text as well.  After we unpicked this story and developed our understanding of figurative devices; we wrote our own versions of this narrative using some of our own personal experiences.  We also used adverbs to describe how a character would speak and included dialogue within our story – we did this to give clues into who our characters were and to move parts of the story on.  We embedded this learning later when we wrote a second part to the story ‘The Promise’ by Nicola Davies and Laura Davies.  Once we read ‘The Arrival’ by Shaun Tan we wrote diary entries as one of the main characters.  For this we acted in role to fully empathise with the characters.  The impact of this was seen in our writing where we used show don’t tell techniques – you don’t know what that is?  Ask us at home to give you an example!

We move on to non-fiction when we read ‘Can We Save the Tiger?’ by Martin Jenkins and Vicky White.  In this book we learned about the animals that are extinct and the ones on the verge of extinction.  Once we learned what people are doing, and the reasons they are senselessly killing these vulnerable animals we were outraged.  We wrote letters of persuasion to stop these cruel acts. I’m sure you would agree with us, wouldn’t you?

To write persuasively, you have to use a very specific set of literary devices.  Can you spot some in the last paragraph?  If you get stuck, ask one of the professionals at home (that would be a Year 6 child by the way!).

In maths, we have been consolidating our knowledge of place value and applying this to calculating decimals. From this, we moved from decimals into fractions and discussed the conversions of this, relating it to percentages, ratio, and proportion. Looking at ratio, we could recall our prior knowledge of angles and using mathematical resources such as protractors to accurately measure and input data into pie charts. Throughout our learning, we applied our knowledge of mental and written operations, ensuring to find the most efficient method. We have learned about 2D shapes (also known as plane shapes) and 3D (solid) shapes, identifying the vertices, faces and edges. We moved this learning on to looking at types of measurement such as perimeter, area, and volume. In addition, we have looked at statistics, focussing on types of graphs such as line graphs, both problem solving and drawing our own graphs. We had to calculate findings from the graph and input data using intervals on the graph, which could be tricky when the numbers are beyond 100,000s!

In Autumn 1, we became light experts. We loved learning that light travels in straight lines, that shadows are formed by an absence of light and the speed of light is at 300,000 km/sec (this shocked us!) We applied our scientific enquiry skills by making predictions, observing, and collecting information from investigations we carried out. We had to present our findings to the whole class and prove/disprove our hypotheses. Finally, we learned about periscopes and how you can see using them which sought upon our brilliant mathematical skills!

By Autumn 2, we moved onto the topic of evolution and inheritance. This linked closely to our writing and reading topics, deepening our knowledge of famous scientist Charles Darwin and his voyage of discovery (can you see why the book helped us now!). Using this, we took part in investigations such as bird beaks and what beak suits which diet, for example, an eagle has a short, curved beak which helps it pick at the meat of its prey (yuck!) This developed our knowledge of variations in species and adaptations that were essential for survival in specific environments. We used our own researching skills and secondary sources to find out about another famous scientist, Mary Anning, who was well known for discovering fossils. Finally, we loved learning about inherited characteristics. Our favourite fact was that you inherit eye colour and lobed or lobeless ears!

During last term, Year 6 learned about the history and the stories from the Ancient Greeks.  We started this topic by researching the key historical events of this civilisation and ordered them on a timeline (the Ancient Greeks were around before the common era, we learned this is what BCE means on dates!).  We learned and rehearsed some of Aesop’s fables, some of which we already knew from Nursery stories, how cool is that!  As part of this topic, we got to meet Alexander the Great, well we didn’t actually meet him, but we learned so much about him, it felt like we knew him.  In fact, we learned so much about his incredible life we wrote biographies on him.

We also learned about how the Ancient Greeks built their own democracy, traded and made money.  We used our historian skills of comparing these to what use today and how it was influenced by what they created.  We made links to our own government, school council and the effects having a democracy has…most of the time!

Finally we learned about the Olympics, which most of us had no clue that the Ancient Greeks invented.

During the spring term in music we have been consolidating our understanding for rhythm and beats by bar. We have had to carefully listen to music to determine the sounds, instruments and rhythm and be able to explain to our class how many beats in a bar. From this, we have been able to create our own music and encourage others to follow our rhythm. We have become very good at this and are slowly becoming musicians!

This term in computing we looked at coding using J2E scratch. We were already familiar with this system and were able to apply new skills such as creating an animation that could move, talk (both using speech bubbles and voiceovers), hide, and reappear on screen using timers. We had to focus on a particular theme using a spooky background, create our own scratch characters which suited said background and build on these as the weeks progressed. We moved on to spreadsheets and were able to input data into a spreadsheet as well as edit existing data. We could calculate and solve problems using ‘SUM=()’ and add graphs to spreadsheets to present our data.

The focus in Art this term has been on developing our pencil techniques, more specifically our shading, stippling, blending and cross-hatching.  We used these techniques as well as learning about size and proportion through still life drawing.  Firstly, we observed an image from one of the Parthenon sides from the Ancient Greek era; two soldiers on two horses heading into battle.  We looked at the positioning of each of them then decided on a starting point.  We drew what we could see was in the foreground first and started with basic lines which we then built upon. 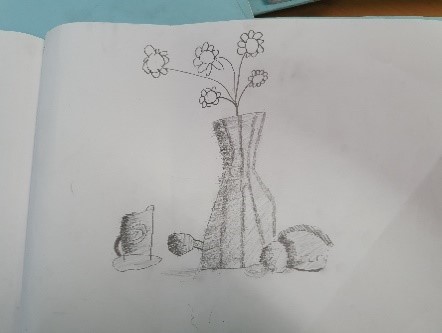 This term in P.E., we have been developing our skills in gymnastics. We focussed on stretching, seeing how high we could jump and also using beams. We became very good at balancing and even challenging ourselves throughout the weeks. Our P.E. lessons always encourage team work and being supportive of others around us, helping not only ourselves but others recognise what is safe, what is going to support us and what we can do to develop ourselves further.

Our focus in Mandarin this term we covered lots of different topics, these included greetings, counting up and down, family members and how we refer to them as well as colours and fruits. We also looked at domestic animals, wild animals and farm animals! We can give greetings and have practised singing songs in Mandarin too. Next term, we will start off spring term focussing on geography, such as sizes, locations, types of weather and countries. 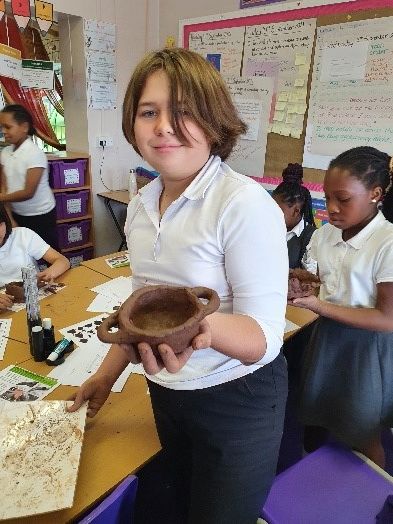 This term, we have been learning about Hinduism. We have looked at the similarities and differences between Hinduism and other religions.  We learned what festivals Hindus celebrate with a focus on Diwali. During this learning we looked at the story of Rama and Sita and what traditions Hindu’s have when celebrated Diwali. We then moved onto learning and understanding the importance of…

We moved onto Christianity with a focus on festivals. We first looked at the liturgical calendar and created our own pinwheel versions. We determined the significance of colours to the religion, for example, white is purity and a closeness to God and is worn at Christmas. We learned that the first six months of the year are following the story of Jesus, beginning at his birth until his death. We could tell you about festivals such as Palm Sunday, Lent, and Christmas celebrations (like how to make a Christingle, what its significance is and what each item represents!) We evidenced our fabulous learning by retellings, comparing different events and categorising events around certain times of the year.

In spring, we will be focussing on consolidating our learning of place value and applying this to sequencing and coordinates. From this, we developed our understanding of coordinates into translating and reflecting shapes. We will look at applying mental and written methods to solving calculations of the four operations. This is applied throughout our maths focus to develop our mastery in mathematics, finding the most efficient method! In writing, we will continue to write a range of texts, for example, persuasive texts, diary entries in role, and biographies. One book we will be reading tells us the history of the suffragettes and we will be engaging in debates around the fairness of our history. For reading, we will be consolidating our understanding of reading skills such as words in context, inference, and summarising. We will be developing our understanding of author’s choice and engaging in discussions around all types of books. In science we will be looking at living things and their habitats. In R.E., we will look at Buddhism and in Topic we will learn about the Maya civilisation. During DT, we will be making Maya headdresses and models of Maya houses!