“To be or not to be, that is the question” was just one of the famous Shakespearean phrases that children pondered during Conway’s recent Shakespeare Week, where children were introduced to Shakespeare and his plays in a fun and exciting way.

Children in Key Stage 1 were transported to the enchanted forest in A Midsummer Night’s Dream and produced some fantastic work describing what they could see around them. Taking inspiration from Puck’s love potion, children drew their own magical flowers and described their effects.

Mya in 2P said: “My favourite character is Titania because she is a fairy and I liked it when she got the flower juice squeezed in her eyes. I even got a certificate for understanding Shakespearean language!” 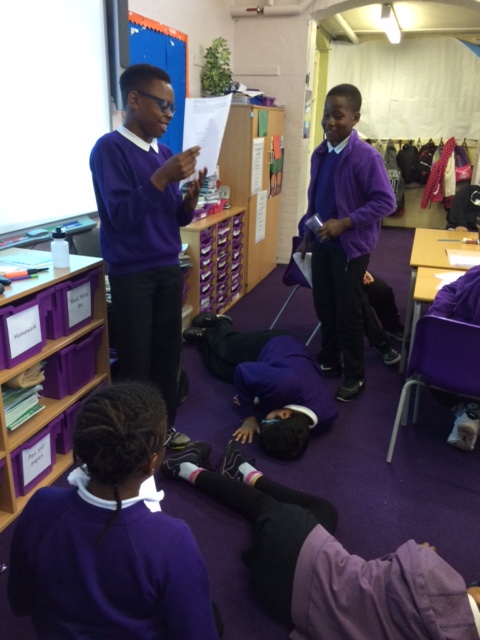 In Year 3, children enjoyed learning about The Tempest and used music and drama to help them understand the characters in the play. They explored Caliban’s famous speech – "Be not afeard; the isle is full of noises" – and discovered that it was included in the opening ceremony for the London 2012 Olympics!

Atharwa from 3PG commented that he loved reading The Tempest and was particularly enthralled by the magic. “I was so amazed by Prospero’s spells that I almost fell off my chair!” he said.

Year 4 enjoyed delving into Macbeth, Shakespeare's mysterious tragedy, and looked closely at some of the characters; particularly Macbeth and the three horrid witches. The highlight of the week was undoubtedly their production of Macbeth. Everyone had the opportunity to participate. Children enjoyed learning their lines, creating props and shining on stage as characters from Macbeth! There are definitely a few budding stars in Year 4! London’s West End – watch out!

Setsofia admitted that at first Shakespeare may seem “boring” to some children, but not for long! He said: "When we learnt about Macbeth, I discovered that Shakespeare was a brilliant and interesting man. It was like stepping back into the Tudor times and experiencing what it was like, and what the actors experienced."

Year 5 had great fun examining the sibling rivalry in King Lear and wrote their own modern day version, where Goneril claims to love King Lear more than her iPad! Children explored the weird and wonderful language of Shakespeare’s time and even created their own insults, such as

“Thou art an infectious, onion-eyed canker-blossom!” and “Thou art a surly, tickle-brained maggot-pie!” I’m sure you’ll agree, they definitely get the message across!

Year 6 did some excellent drama work about Hamlet and produced some thoughtful pieces of writing about the play and its themes of revenge and corruption. Het said: “I enjoyed all the twists and turns in Hamlet and Shakespeare shows us that revenge is not always the best thing to do.” Jayen added that Hamlet’s famous “To be or not to be…” soliloquy inspired him to think before he acts.

The children all worked so hard and really enjoyed the week which is reflected in the high quality of work they produced – well done everyone!